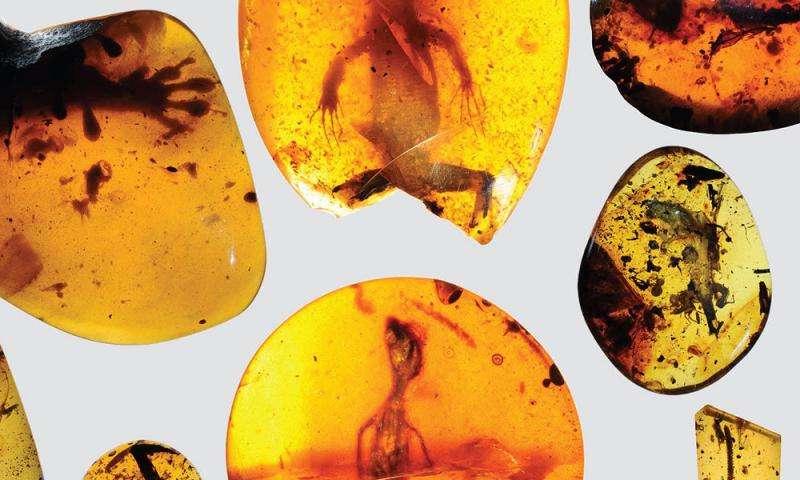 A researcher working in the American Museum of Natural History, New York, has confirmed the age of the world’s oldest known fossil chameleon in part of a bumper find of fossilised lizards. In an almost Jurassic-Park style story, twelve of these ancient reptiles were encased in amber (sap from a coniferous tree) in what is now Myanmar. Preservation in amber can provide scientists with incredibly high quality fossils, with skin, soft tissues and coloured scales often surviving much longer than they would in rock beds. The twelve specimens found in Myanmar have been part of the museum’s collection for several years, but only recently has CT-scanning allowed the most intact animals to be accurately described. These three (a chameleon, a gecko and an archaic lizard) have revealed crucial anatomical details which will help researchers clarify how they evolved: for example, the gecko appears to possess its characteristic sticky footpads, and although the chameleon has its famously long tongue, it lacks the fused toes and classical coiled body shape seen in modern species. Dating places the fossils at around 100 million years old – 78 million years older than the previous oldest chameleon specimen – meaning they represent a ground-breaking find in the study of these fantastic lizards. In particular, it has long been thought that the origins of the group lay in Africa, but the placement of this Asian fossil challenges this theory. The remaining animals from the amber group are still being studied, and who knows what they could still reveal.