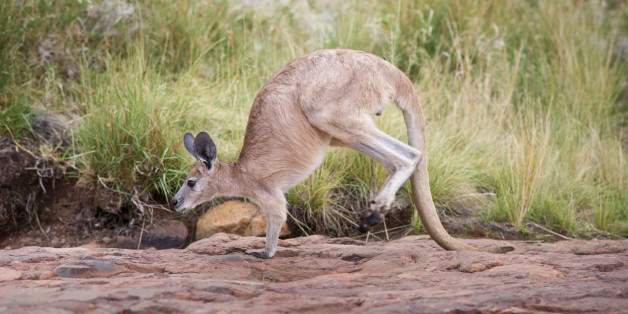 Although they’re famous for their bounding jumps, kangaroos are masters of another curious method of locomotion: they walk using five ‘legs’. When moving at slow speeds, kangaroos walk on all fours, but they frequently move their two hind legs in unison, rather than staggered like most other tetrapods do. As they move their hind legs forward, the tail supports the body. However, it has recently been demonstrated that the tail doesn’t only act as a crutch, supporting the body’s weight while the limbs move, but that it actively generates more forward force than the hind- and fore-limbs combined! Extensive musculature and densely-packed mitochondria both support data gathered from high-quality video, which indicated that the tail is used to propel the kangaroo forwards in a step.

Read more about this work here.