What were shark communities like before humans? We know that shark populations have waned significantly over the past several centuries, but we don’t yet have a very good idea of the magnitude of their decline. This information is locked in the past, inaccessible by traditional survey techniques. However, shark dermal denticles present us with a unique opportunity to travel back in time. But first, what are denticles?

Denticles are tiny, tooth-like scales lining the skin of most sharks and rays. Think of them as ‘skin teeth.’ They’re the reason shark skin feels like sandpaper if you rub it in a certain direction. That is, if you’ve had a close encounter with a shark. Denticles provide a durable yet flexible armor that can serve a number of purposes, ranging from hydrodynamic efficiency to protection. Accordingly, denticle morphology is pretty diverse, with their shape and structure reflecting both their individual functions and underlying shark ecology. For example, fast, predatory sharks possess thin, ridged ‘drag reduction’ denticles that resemble crinkly potato crisps. Both the closely-spaced ridges and ornate microstructures on the denticle crown help the shark swim faster by decreasing turbulence. Speedo’s Fastskin swimsuit, which controversially helped competitors to smash world records in the 2008 Beijing Olympics, was inspired by this neat evolutionary adaptation.

On the other hand, demersal sharks such as nurse sharks are characterized by thick ‘abrasion strength’ denticles (below) that protect them from the rocky, sandy, or coralline substrates they inhabit. You can even see scratches on the crown which may have been caused by collisions. Some of these thick denticles have widely-spaced ridges that are hypothesized to play a minor hydrodynamic role. 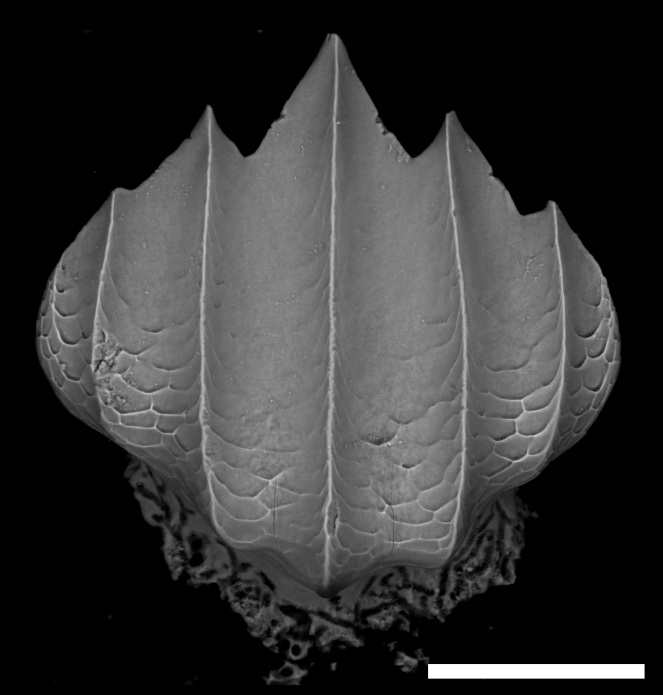 There are also more complex, spike-shaped denticles that may protect the shark against the settlement of ectoparasites on its skin (above, bottom left). However, their precise functions remain unknown for now.

With this knowledge and the potential insight we can gain from denticle morphology, they could play a crucial role in understanding shark communities of the past. This will not only help us to reconstruct populations long gone, but also to understand what changes have taken place as a result of human impacts since.

We have found denticles to be well-preserved in fossil reef sediments, which could potentially reveal the abundance and diversity of ‘pristine’ shark assemblages. Finding and identifying them, however, can be a challenge. We collected nearly 360 kg of sediment from a rare, exposed 7,000-year-old fossil reef as well as from comparable modern reefs in Bocas del Toro, Panama. After using acetic acid to digest away the carbonate (shell and coral), which comprised around 99% of the total dry weight, we extracted close to 900 denticles. All of them were picked out manually using a paintbrush under a microscope, as denticles generally range from 100 µm to 1 mm in size (for reference, some of them are no wider than a couple strands of hair!). We then classified them using a large reference collection built from museum specimens.

Preliminary data shows a significant decrease in the relative abundance of ‘drag reduction’ denticles and an increase in ‘abrasion strength’ denticles over the past ~7,000 years, suggesting that an important shift in shark community composition has occurred. This previously unexplored data source promises to provide unique insight into shark communities prior to the advent of fishing, facilitating exciting and important assessments of the magnitude and ecological consequences of shark declines.

Interested? Read more on Erin’s blog, or from the following sites:

All denticle images courtesy of Erin Dillon and Jorge Ceballos.